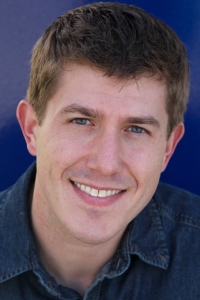 I recently got a chance to do a brief interview with Josh Vogt, who… well, actually let’s just let him introduce himself:

Josh Vogt has been published in dozens of genre markets with work ranging from flash fiction to short stories to doorstopper novels that cover fantasy, science fiction, horror, humor, pulp, and more. His debut fantasy novel, Forge of Ashes, adds to the RPG Pathfinder Tales tie-in line. WordFire Press is also launching his urban fantasy series, The Cleaners, with Enter the Janitor (2015) and The Maids of Wrath (2016). You can find him at JRVogt.com or on Twitter @JRVogt. He’s a member of SFWA as well as the International Association of Media Tie-In Writers.

Both of his newly released novels look great, although I admit that I’m a little jealous because I also have an (unsold) story about janitors staving off supernatural forces with cleanliness. But I won’t hold that against him! Here’s the interview: 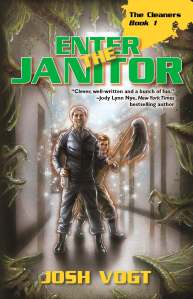 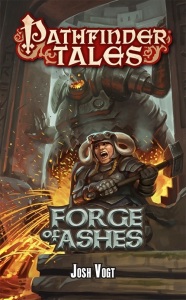 Who are you, what do you write, and what is your favorite food?
Ah, so we begin with the existential questions. Very well. My name’s Josh Vogt and I’m a speculative fiction author as well as a full-time freelance writer. I mostly write fantasy, but also veer into science fiction, horror, pulp, humor, and often a mix of many of these. I also freelance for a number of tabletop RPG developers and publishers, working on tie-in fiction, campaigns, game manuals, and more.

My favorite food (currently) is sushi.

Briefly explain what your book is about.
I’ve actually got two books coming out, one right after the other! The first is Forge of Ashes, a tie-in novel to the Pathfinder roleplaying game. It’s a sword and sorcery adventure that focuses on Akina, a dwarven barbarian who returns to her mountain home after fighting abroad for a decade. But things have changed drastically in her absence—not only has her family fallen on hard times, but her beloved mother has also vanished into the tunnels beneath the city and is presumed dead. Akina determines to restore her family at all costs, no matter what dangers stand in her way.

The other is Enter the Janitor, the first in my dark humor urban fantasy series, The Cleaners. In it, a grizzled old janitor named Ben works for a supernatural sanitation company that keeps the world clean and safe from the forces of Corruption (aka Scum). Just as Ben gets a new, germaphobic apprentice, he’s tasked to discover the source of an imbalance between Purity and Corruption that could destroy whole cities if not dealt with.

Would you live in the world of your book? If so, would you be a hero, villain, or NPC?
I’d live in either world, yes. Golarion (the Pathfinder setting) would be highly dangerous, but that’s why so many love to go adventuring there in the first place. Just take lots of healing potions, right?

The world of The Cleaners would be fascinating as well, getting the chance to work behind-the-scenes of modern society, saving people’s lives without them ever realizing it…it’d almost be like being a secret agent, except with a license to clean instead of kill (although Scum are still fair game).

Would you be friends with your protag? Would s/he be friends with you?
Akina and I might be friends if I fought beside her for a few battles and proved myself a worthy ally. Though she has something of a temper, so I’d have to be careful not to insult her family or anything.

Ben probably wouldn’t mind having me along so long as I did my share of the work cleaning toilets or washing windows. The job always comes first for him, because it’s the only thing keeping Scum from overrunning the world.

Let’s say that the people from your book are teleported to our world. What would surprise them the most?
Akina would have to get over the sudden absence of magic as well as the advanced technology we have compared to her fantasy existence. Though she might approve of the Game of Thrones television series, what with its penchant for brutal violence.

Ben would also have to deal with the absence of real magic in our world, though he’s resourceful enough that he can handle some nasty threats without a spell in sight. He’d likely adjust quick enough and keep on pushing his mop around any floor that needs cleaning.

Tell me about an author that inspires you.
Max Gladstone is a fantastic author everyone should take the time to read. He veers far and away from any traditional fantasy elements, creating incredibly unique worlds and characters full of fascinating (and fearsome) magic. It’s some of the more refreshing storytelling I’ve encountered in a long while, highly entertaining, and evocatively written. His Craft Sequence books include Three Parts Dead, Two Serpents Rise, and Full Fathom Five, with Last Snow First on its way. Gorgeous cover art too, which doesn’t hurt.

Just for fun, who would win in a fight: Captain Picard, Gandalf, or Obi-Wan Kenobi?
Ooh. Tough choice, and it’d depend on how fair of a fight we’re talking about. I’d go with Gandalf, simply for his ability to return from death. Even if he gets knocked down, he’ll be back sooner or later to finish the job. Hard to overcome that kind of persistence.