So I’m thinking about working on the new cover for The Taint soon. I’m still in the stage of coming up with ideas, which is tough because I suck at covers. I have a poor visual imagination and no flair for art. There’s a reason why I went into writing and not visual arts, and I’m probably going to wind up paying someone to do the cover for me.

But anyway, there are a few things that went wrong with the original cover that I want to fix this time around. Here’s the old cover for reference: 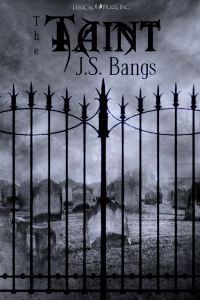 Originally, I was pretty happy with this cover. And one thing that I still love is the font chosen for the title and byline: jagged, eye-catching, but still readable. It was an excellent choice. However, there are a few things that I now find problematic:

I hope to fix both of these problems this time around.